The cross-over event will see the finals of the Monarch Virtual Simola Hillclimb run on the same days as the three-day real event on 3-5 September.

The first edition of the Virtual Simola Hillclimb run earlier this year proved to be a huge success with competitors, fans, and the media all enthusiastically embracing the event and keeping the Hillclimb top of mind.

For the second edition, the basic structure of the virtual event has remained the same as in edition one featuring four weeks of time attacks each with a new car. The organizers will reveal the car to be used each Friday before the next round.

A slight tweak to the format has been made to align with the real event more closely. This change will see two competitions run each week rather than the single competition of edition one: one for classic cars leading to the Classic Car Friday (3rd September) final, and one for modern race and road cars competing in the King of the Hill category leading to the finals on Saturday 4th and Sunday 5th September.

The event starts with the opening round on Monday 26 July running through to Sunday 1 August. Round two is from Monday 2 August to 8 August. Round three will run from 9 – 15 August, and Round Four – the final qualifying round, from 16 – 22 August. As in edition one Monarch will be running 10 servers to host the online competition.

The top-10 finishers from the four qualifying rounds in each category will progress to the finals. There are no restrictions on who can enter the event, however only residents of South Africa will qualify for prizes. Prizes will be announced on Monday 23rd August.

Our virtual technology partner Monarch ZA has created a stand-alone version of the Simola Hillclimb track. The perfect way to prepare yourself and hone your skills for next month’s event.

The track can be used in Assetto Corsa (PC version) only. Enjoy practicing before hitting the hill for real!

Your Entry will subscribe you to our Newsletter. This ensures that you will be kept up to date with all the info you need to know to compete in the Virtual Knysna Simola Hillclimb. 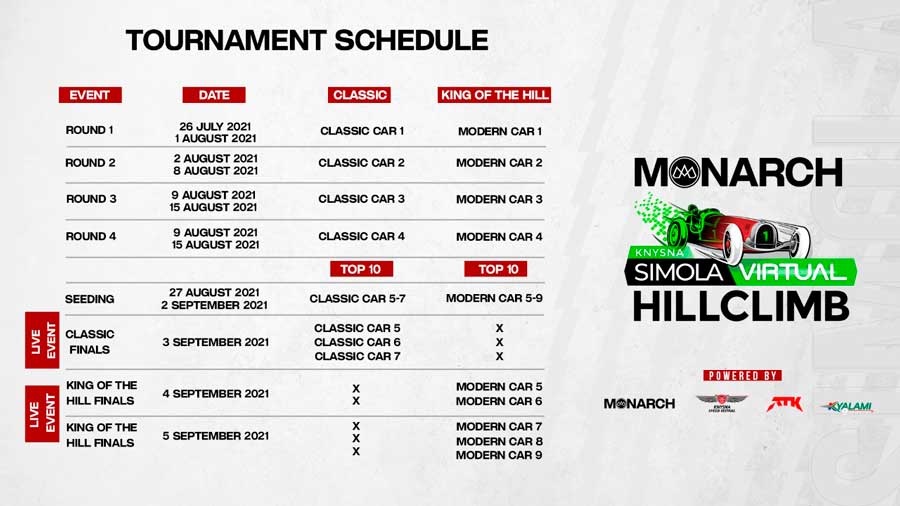