Former Group N and Rally driver Charl Wilken emerged victorious from an extremely closely contested round 3 of the Virtual Knysna Simola Hillclimb. The top three drivers were separated by just 0.083 seconds in the final classification.

This round saw competitors take to the wheel of an AMG Mercedes-Benz GT3 specification car, which provided a healthy amount of grunt up the hill and came close to setting the fastest time to date up the virtual hill.

Round 2 winner, Ruan Gouws, led for much of the week before Wilken set his winning time of 36.697 seconds on the last day to pip Gouws by just 0.068 seconds, with round 1 winner Lorenzo Gualtieri taking the final podium place a scant 0.083 seconds off Wilken’s pace.

This trio has generally been the leading drivers throughout the opening three rounds, with Gualtieri leading the way with podium finishes in all three rounds. He has a win, a second and a third place to his name. His consistency sees him lead the championship by two points with 284.

Gouws has also been super consistent, winning round 2 and finishing seventh in round 1 to go with his second place this week. He is just two points behind Gualtieri in the points race.

Wilken has also made two visits to the podium after finishing round 1 in second place and round two in eighth-place to trail Gouws by one point in the standings.

Regular Simola Hillclimb competitor Juan van Rensburg took fourth (36.855), Adriaan Nel was fifth (37.110) and Willem van Rensburg finished sixth (37.155). As in both previous rounds, the competition was fierce with the leader board constantly changing as the competitors fought for position with the top 17 competitors covered by less than one second at the end of the round. 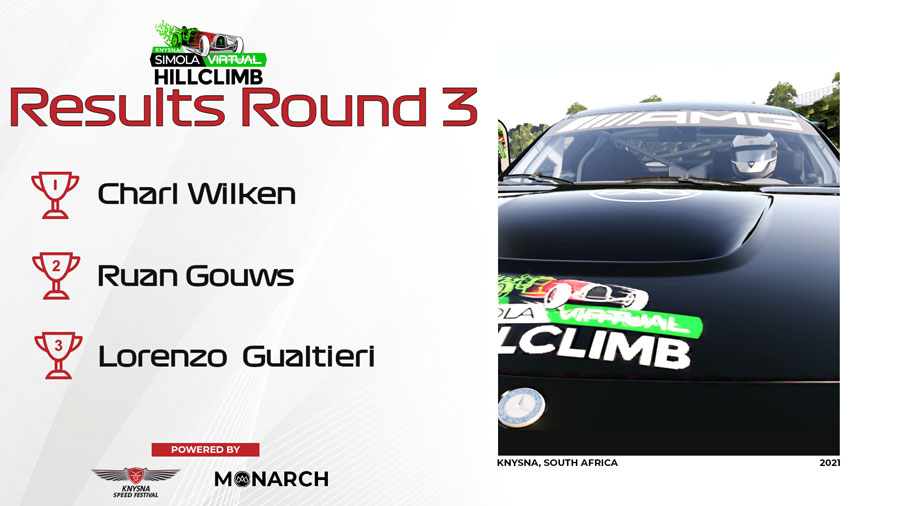 The round saw 3 316 official runs being made up the hill, with total number of runs over the three rounds now standing at over 12 000. One hundred and twenty-nine drivers have scored points for the competition with the top 30 all still in with a chance to qualify for the Top 10 shoot-out finale.

Round four started on 12 April and runs to 18 April. The selected mystery car, the Le Mans-winning Mercedes-Benz C9, was only revealed an hour before the start of the round to minimise the practice time available to competitors.

The scores from all four rounds will produce the Top 10 competitors to qualify for the finals on 8 and 9 May, and the winner after those two days of competition will be crowned the Virtual King of the Hill that Sunday evening.

Full rules are available on the Knysna Simola Hillclimb here with updates and news posted on our website and social media channels as follows: