Lorenzo Gualtieri became the first double winner when he secured victory in round four of the Virtual Knysna Simola Hillclimb. Gualtieri, who was also victorious in the opening round, won a closely contested challenge by 0.083 seconds from round two winner Ruan Gouws.

The two victories, to go with a second and a third in the four rounds, ensured that Gualtieri finished the four rounds on top of the leader board with 384 points, seven ahead of Gouws on 377.

Former Group N and Rally driver Charl Wilken followed up his victory in the previous round with another podium result in this round, 0.102 seconds behind the winner, to end third in the standings with 373 points. 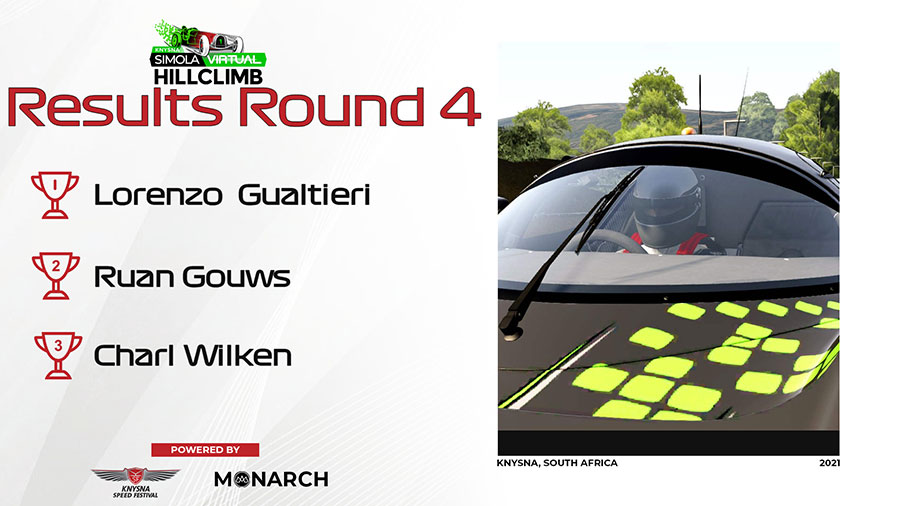 Round four proved to be a difficult challenge for the drivers with the selected car, the Le Mans winning Mercedes – Benz C9 having no performance restrictions placed on it by the organisers. It therefore came down to fine tuning the set-up and putting in endless practice laps to get the best out of it, and it was no surprise that the C9 proved to be the fastest car across the four rounds.

As in the previous three rounds, the fight between the top three proved to be intense from the first day. Gualtieri took an early lead, but Gouws forged ahead and appeared to be on his way to the win until shortly before the end of the round on Sunday night when Gualtieri improved his time to 34,150 seconds for the win. Gouws’ best effort stopped the clocks at 34.233 seconds with Wilken on 34.252 seconds.

One hundred and thirty competitors set times during the qualifying rounds. A total of 15 512 runs up the hill were logged on the official game servers across the four rounds covering a total distance of 29 472 kilometres.

Details on the final will be released soon. Updates and news will be posted on our website and social media channels as follows: