History was made over the past weekend (8 and 9 May) when Lorenzo Gualtieri won three races to claim the inaugural Virtual Knysna Simola Hillclimb race and King of the Hill title.

Gualtieri, who finished in top spot in the pre-qualifying rounds, showed his intent from the first race by taking victory in a Nissan GT-R Nismo. He followed this up with further wins in races three and four behind the wheel of a Porsche 911 GT3 RS and a BMW M3 GT2 respectively, and placed fourth in race two (Audi TT Cup) and third in race five (Pagani Zonda R) to finish on 51 points for the five-race final.

“It is quite a surprise to win the event and there was a lot of suspense,” said the relieved winner after the event. “It’s been long and hard, and taken a lot of effort as it was so competitive. Because all the cars are identical with the same set-ups, anyone could win. It’s not to say that the fastest guy will win – if you make one mistake it’s finished.

“What an awesome event. I enjoyed it so much,” Gualtieri added. “Thanks to the organisers for putting together such a great event. It was super competitive, and I really enjoyed competing against all the drivers. I can’t wait for the next one!”

Victory saw Gualtieri secure an entry into the Motorsport South Africa Showdown event of the Mercedes Benz ProSeries final. He also won a two-night stay at the Simola Hotel in Knysna, hospitality tickets to the Simola Hillclimb in September, VIP tickets to the Kyalami 9-hour and a gift pack from Knysna Speed Festival and Visit Knysna.

Ruan Gouws, who remarkably has no real racing experience and only took up esports five months ago, finished as runner-up with 47 points to his name, having won race two, and scoring two second-place finishes (races 4 and 5), a third in race three, and fourth place in race one.

Gouws won hospitality tickets to the Simola Hillclimb in September, a VIP ticket to the Kyalami 9-hour and a gift pack from Knysna Speed Festival and Visit Knysna.

Willem van Rensburg took the final podium place with 35 points. He proved to be very consistent, taking two second places (races 2 and 3), a fifth (race 1), sixth (race 5) and a seventh-place finish (race 4). He won a hospitality ticket to the Simola Hillclimb in September, a VIP ticket to the Kyalami 9-hour and a gift pack from Knysna Speed Festival and Visit Knysna.

Race five winner Blake Kruger missed out on a podium place by one point to Van Rensburg. Kruger qualified fastest for race one, but an accident cost him dearly in the final standings as he languished in tenth place. He bounced back to finish third in races two and four, and sixth in race three before taking the win in the final race.

One of the pre-event favourites, Charl Wilken, could not maintain his qualifying race-winning form in the final, failing to take a win across the five races, and an accident in race four scuppering his title chances. His campaign started off strongly with a second-place finish in race one, but he struggled thereafter taking fifth in race two, fourth in race three and seventh in race five, putting him tied fifth in the points standings with 13-year-old Emile de Villiers on 28 points.

Young De Villiers was impressive and scored a podium with third place in race one, followed by two fourths (races 4 and 5), and two eighth-place finishes (races 2 and 3).

Regular Simola Hillclimb competitor Juan van Rensburg finished seventh with 23 points ahead of Richard Clark (16 points), Ian Upton (15 points) and Denis Mitchell. All finishers from fourth to tenth won entry tickets to the Kyalami 9-hour including access to the SIM Arena, pit lane access tickets to the Simola Hillclimb in September and a gift pack from Knysna Speed Festival and Visit Knysna.

The format of the event saw the top 10 competitors from the four qualifying rounds going through to the final of the Virtual Knysna Simola Hillclimb. The finalists then had from Monday 26 April to practice in all five of the cars selected by the organisers for the finals.

Monarch Events, who developed the game in conjunction with Knysna Speed Festival, provided five dedicated servers for the competitors to practice on from 26 April to 7 May. The practice times set by the competitors were then used as seeding times for the start of qualifying on race day with the fastest going first. In turn, the qualifying sessions on race day determined the reverse start order for the races, as is done in the real Simola Hillclimb.

In total, 15 512 online runs up the hill were recorded in the four qualifying rounds – equalling a combined race distance of 29 472 km. During the 10 days of seeding, the 10 competitors posted 3 772 runs up the hill, equalling 7 167 km. Monarch’s servers recorded a total of 36 639 km being driven up the hill during the event. 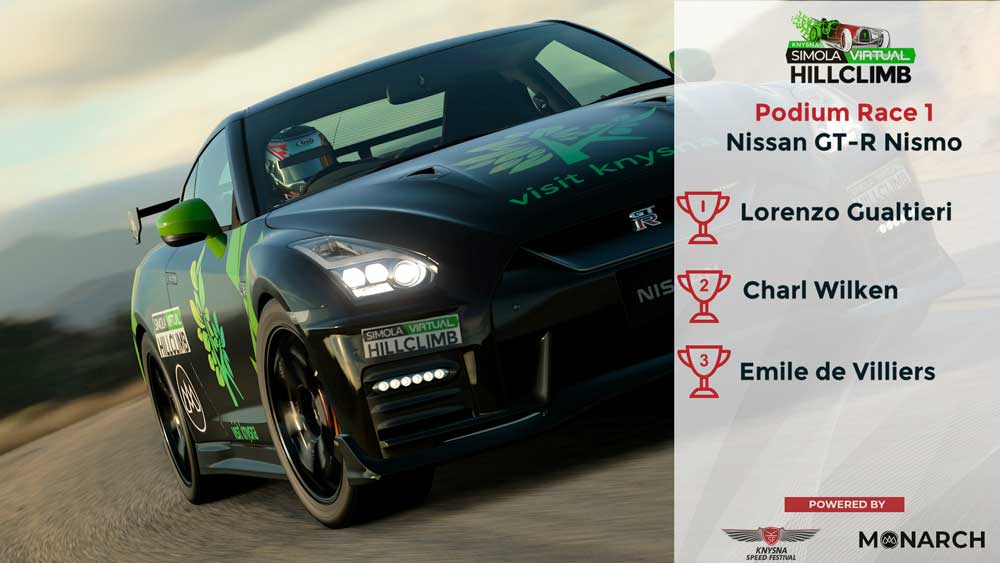 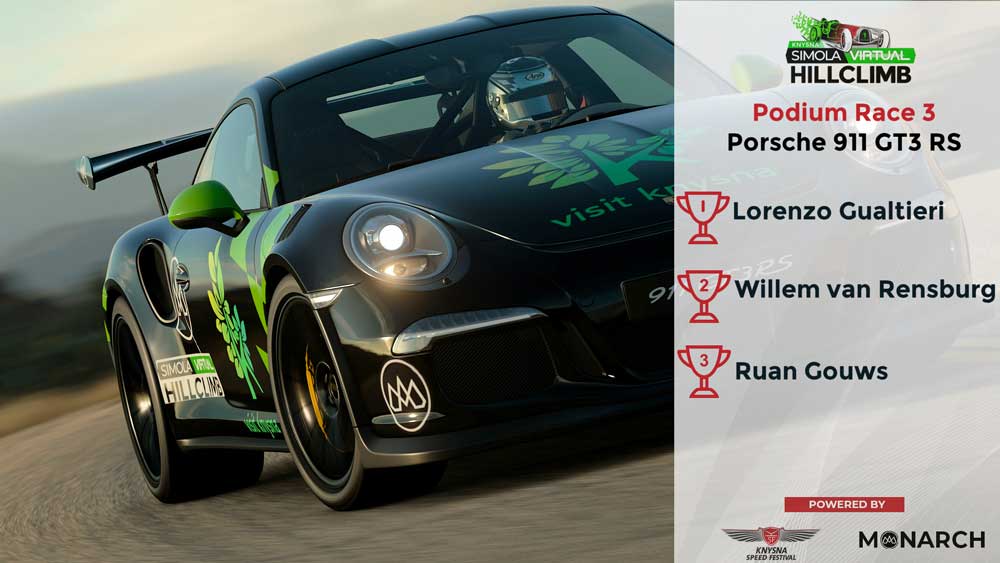 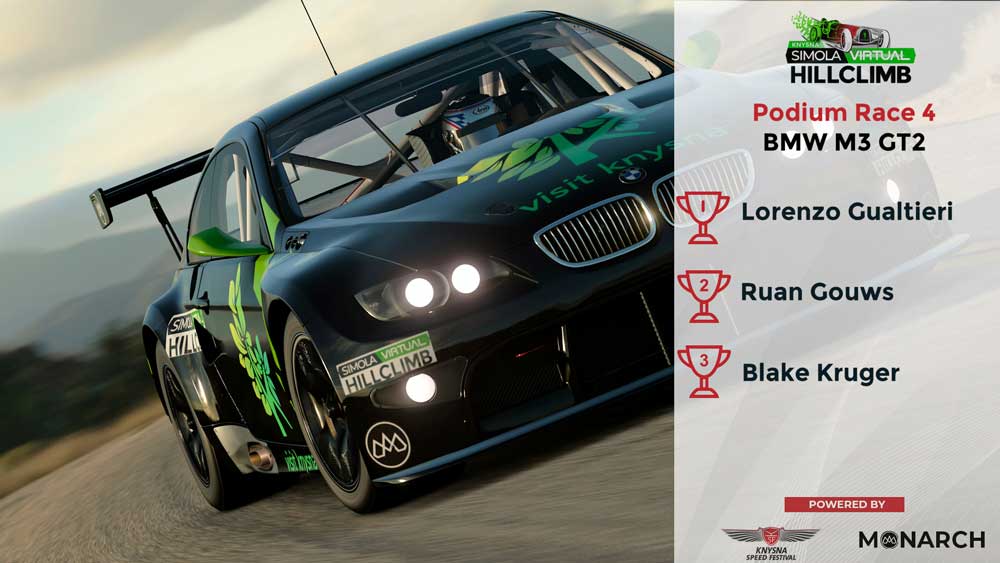 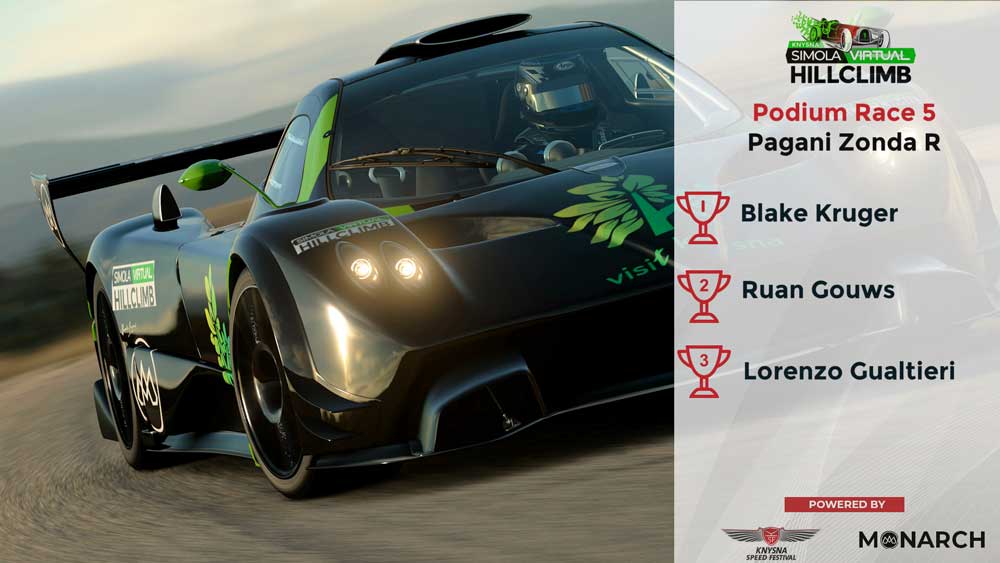 Results from the event and updates and news on future events will be posted on our website and social media channels as follows: